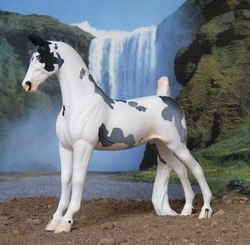 Breed description: clean cut head, long elegant neck, lean body with a rather long back and long limbs, high set tail. The Saddlebred should show supple movement with high leg action. High head carriage is desirable especially in harness horses. Any and all colours are acceptable, with the exception of Appaloosa. Height varies from 15 hh to 17 hh with most averaging 16 hh.

Naming guidelines: No names which are conflicting or very similar to existing registered American Saddlebreds. The name may not exceed 35 characters, including letters, spaces and punctuation.