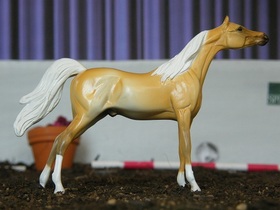 Very nice blend of model and real lines. Abrax's sire, The Roman, is entirely model bred by Legacy Farms for more than 3 generations! He has proven himself as a valuable sire, having sired multiple Express racing Stakes Winners and champions. Abrax is out the petite Saddlebred mare Debutante, granddaughter of Candid Caper. Carries lines to Valley View Supreme, Yorktown and Wing Commander. 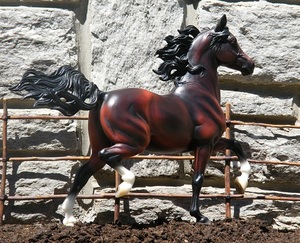 Bel Fire is by three times National Champion stallion Pain In The Brass, a son of the fabulous champion sire Brass, and grandson of the incomparable Arabian stallion Bask++. Pain In The Brass has Starheart Stonewall and Rex Peavine in his Saddlebred bloodlines as well. In addition to that, he is a Nazeer outcross in his Arabian lineage. Bel Fire's dam, Bahila, was a fantastic producer, foaling Arab legends like The Ministrel, AK Khazar and Coaltown. Her maternal grandsire, Gharib, was an Elite stallion who sired many winning offspring. Bahila's bloodlines trace back to Nazeer, Shahloul and Rustem. 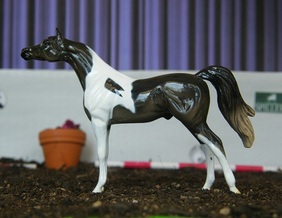 Taboo is a magnificent stallion with great solid breeding behind him. He is by our own Crabbet Arabian stallion Ba Shir, who is a son of Gubbera Park's multi champion headsire Manassah. His lines include several lines to Sindh. Ba Shir's dam is Late November, an outstanding broodmare and mother of many champions and ROM holders. She is one of Gubbera Park's foundation mares of their famous Crabbet program.
Taboo's dam is Tabitha, a daughter of the great Arab stallion AA Apollo Bey. He is by Champion Futurity Stallion, Huckleberry Bey. Tabitha was out of Nevada Rain, a daughter of the Top 5 National NSH Halter stallion Key Sera Sera, and out of Arabian mare Arcadian Adriana.
Taboo is a National Show Horse of very high percentage Arabian blood, making him a great match for Arabian, NSH and ASB mares alike.

Available for breeding 2012 - present, to all Arabian, NSH and ASB mares. Other breeds considered upon request.
~Taboo's Pedigree~
~Taboo's Progeny~