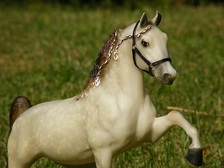 Mares | Stallions
The Tennessee Walker originates from the Narragansett Pacer and the Canadian Pacer horses that were brought to Kentucky in the late 18th century. These pacers were crossed with Spanish Mustangs, producing a new breed that was originally called the 'Tennessee Pacer'. They were used as all-purpose horses on plantations. American Saddlebred, Thoroughbred, Standardbred and Morgan blood was added to improve the breed.
In 1886, a stallion named Black Allen (aka Allen F-1) was born, sired by Allendorf (a Standardbred from the Hambletonian family) and out of a Morgan mare. He became the foundation sire for the Tennessee Walking Horse. His son, Roan Allen, was able to perform the gaits that the TWH is so well known for today, and he set the standard for the modern Walker.

Breed Description: refined and elegant, yet solidly built body. The head is well defined. Long neck with sloping shoulders, short back and strong coupling. The hindquarters are well-muscled, and it is acceptable for the hinglegs to be slightly over-angulated. All solid colors are found in the breed, as well as sabino, overo and tobiano patterns. It is being researched wether appaloosa patterns exist in purebred TWH, but at this moment it is believed that purebreds do not carry the gene for appaloosa.

Our Program:
At this moment, our Walker program is still very small and only just beginning. We stand quality sires and dams that are mostly flatshod or plantation shod. We do not promote the so-called 'Big Lick' Tennessee Walkers, so you will not find those in our breeding program. Some of the lines that we particularly like in our Walkers are The Pusher CG, Ebony Masterpiece, Pride's Generator, Pride's Gold Coin and Triple Threat.