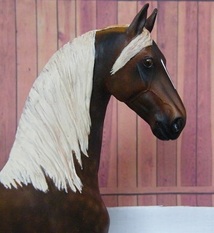 Pedal To The Metal, Morgan stallion
Mares | Stallions
The Morgan is a breed that finds its origin in North America. It is one of the earliest developed breeds in the United States. The Morgan is a unique breed in that it traces all of its horses to only 1 foundation sire: Figure, owned by Justin Morgan (after whom the breed was named). Morgans have been used for many different causes over the centuries; as general riding animals, as cavelry horses during the American Civil War, as coach horses and for harness racing. The Morgan is the state animal of Vermont, and the state horse of Massachusetts.

Breed description: compact and refined in build, strong legs, an expressive face, large eyes, well defined withers, laid back shoulders, upright well arched neck with a clean cut head. The back is short, hindquarters strongly muscled, long and well muscled croup. The tail is attached high and carried gracefully and straight. Height ranges between 14.1 hh to 15.2 hh with some individuals under or over. Some Morgans are gaited, meaning that they can perform gaits such as the fox trot, pace or rack. Most common colours are bay, black and chestnut, but most other colours are found in the breed, with the exception of appaloosa.

Naming guidelines: Maximum 25 characters, including prefix, letters, punctuation marks, and spaces. Cannot use a previously used name followed by "Second" or "Jr", etc. No numerical symbols. Registered prefixes are used and can be looked up here.

Our program:
We take great pride in our Morgan breeding program, which includes the best examples of the breed and some of the rarest colors at the same time.
We stand the magnificent stallion Pedal To The Metal, who carries Lippit blood (the Lippit line of Morgans is considered the purest), and has a very solid pedigee behind him with generations of model breeding by Dragon Star Farm. We hope to acquire some more mares to put to this amazing stallion.
We also stand several fantastic colorful stallions like Snow White's Prince and Universal Covenant. Both produce fantastic colored Morgan foals!