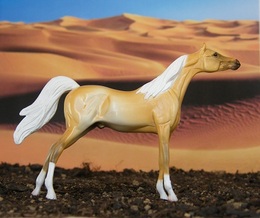 Abrax, palomino NSH stallion
Mares | Stallions
The National Show Horse (NSH), originated as a cross between an American Saddlebred and an Arabian (of any strain). It is now established as a separate breed, since the founding of a breed registry in August 1981.  Registered animals today may be the offspring of registered NSH parents or may be a combination between an American Saddlebred, Arabian, and a National Show Horse. Although any combination of these three breeds may be used, as of December 1, 2009 there must be at least 50% Arabian blood in the horse to be registered, up to 99% Arabian blood (formerly 25% minimum Arabian blood was required for registry). In the real horse world, the Saddlebred and the Arabian parent used to produce a National Show Horse must first be nominated and approved by the NSHR board of directors, otherwise the resulting NSH foal cannot be registered. Now, in the model horse world this is not of importance of course, but for those who do want their ASBs and Arabian sires/dams nominated, there is the IPABRA NSH Program, where you can register your ASBs and Arabs as Nominated Sires and Dams for a small fee (see here).

Our Program:
We have a rather wide variety of stallions and mares available. We breed NSHs mostly of high percentage Arabian blood, as we find that they are the nicest representatives of the breed. Of course we do have National Show Horses of lower percentage Arab blood (in face two with only 75%), as they have the nicest colour variations since their Saddlebred ancestry is still up close. To breed to our NSHs we have many strains of Arabians available, but we prefer to breed them to our Egyptian Arabians. Our Saddlebreds are also available to cross with our NSHs, but the resulting foal will not be registerable as NSH.