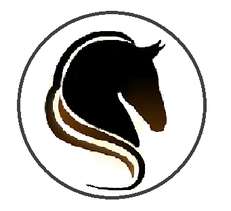 Beautiful stallion with great lines. Silver Wings is by the great stallion Silver Blue, sire of many champion offspring. He is from the strongest Crabbet line in the UK, and he is 100% Crabbet. Silver Blue's grandsire is Blue Domingo, sire of many champion progeny. He was crossed to Junior Female Champion mare Silent Wings, dam of many champions that excel in a wide range of disciplines. Her sire was Oran, perhaps the greatest son of the magnificent Riffal*. On top of that, Blue Domino's sire was outstanding producer Rissalix, one of the few horses that Lady Wentworth ever regretted selling. Silver Blue's dam is Silver Sheen, a two times Junior Female Champion and 4 times Supreme Female Champion daughter of Bright Shadow. Through her dam, Silver Grey, she carries another line to Riffal.
Silver Wing's dam is Silent Dove, daughter of Yemama, the British National Junior Female Champion. Silent Dove's maternal grandsire was the Supreme Male Champion and great sire Indian Magic. Furthermore, Silent Dove carries a line to Riffal through her maternal granddam Silent Wings.
Silver Wings is a great stallion with quality lines. He is an important part in our program as he is heavily Riffal*/Rissalix bred, and he will influence the future generation. 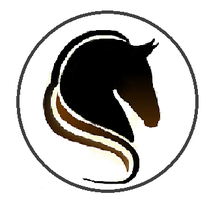 Silver Sparrow is a lovely combination of both our Crabbet foundation sire and dam. His sire, Silver Wings, is a son of the great sire Silver Blue. Silver Blue sired many champions and also his progeny have proven themselves as exceptional breeders. His line has proven to be the strongest in Britain. Silver Blue was by Azrak and out of the multi champion mare Silver Sheen. Silver Wings' dam was Silent Dove, a nice mare with a beautiful classic head. She was by Ludo, a fairly influential stallion. Silent Dove was out of Yemama, a British National Champion mare and producer of champions.
Silver Sparrow's dam is our foundation mare Hadiyyah, a gorgeous black mare with a very solid pedigree. Her sire was Rasham, a son of the great Greylight. Hadiyya's lines include Riffal, Sindh, Royal Diamond, Rissalix and Indian Gold. She is an outcross on Silver Vanity, so she matched perfectly with our stallion Silver Wings.
Silver Sparrow is a classic example of a horse of the Silver lines, with his silvery grey coat and refined build. He is of the Barada II dam line, a very influential line from Australia. Silver Sparrow is a great combination of Silver lines over Greylight with lots of Riffal and Rissalix blood, and a few lines to Indian Gold as well. 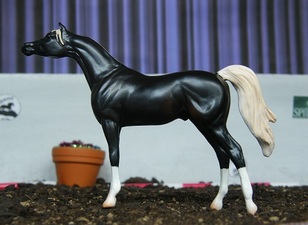 Ba Shir is a fantastic blend of pure Crabbet Arabian bloodlines. He was sired by Gubbera Park's current headsire, Manassah, who has made quite a name for himself by siring multiple champion offspring and Triple Cup winners. He himself holds too many champion titles to list here, but among them is the AIMHC Roll of Superior Champion Awards, AIMHC Roll of Merit, ABRB Racehorse Of The Year and AMAHA NSH Nominated Sire. His progeny perform according to their breeding, and have earned many champion titles. Manassah was by supreme champion Ruberto, a son of the supersire Sindh* and Ringlet, a daughter of the exceptional broodmare producer Riffal*. Manassah's maternal sire, Silwan, was a great horse in his day as well, siring many quality offspring. Even though his offspring were not shown as much as Sindh's, they were still making a name for themselves as great producers and horsemen's horses.
Ba Shir's dam was Late November, one of Gubbera Park's foundation broodmares. She produced many winning offspring, and her own showrecord is not to be overlooked either. Late November is the perfect blend of lines, with Sindh/Riffal over Dargee/Silver. Her sire Gloaming was a magnificent example of his bloodlines from a well proven
cross, her dam Miraa also a great producer from the wonderful and great moving Dargee stallion Crystal Fire*.
Ba Shir is an exceptional stallion with fantastic solid breeding behind him. He would certainly be an asset in any horse's pedigree. 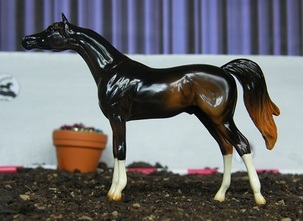 Fantastic pedigree with many great horses. Al Hakam is by Gubbera Park's stallion Raiskh, a son of Silver Lace, one of their foundation mares. He is by multi Supreme Exhibit and HOTY, Volcano. Raiskh's sire is classically Fenwick bred with some of the rarer and lesser known bloodlines. His dam is of the Barada II dam tail line, a line well represented in Australia. Silver Lace is a daughter of Somerled, a well known sire of the Skowronek sire line. Silver Lace has produced many fine offspring for both breeders in Australia as in America, and now her grandson Al Hakam stands in Europe. Raiskh is heavily Barada II and Rikab bred, being an outcross to Riffal and Sindh.
Al Hakam's dam is Cherox Park's mare Emira, a mare also of rarer Fenwick breeding on her sire's side. Her dam was Mythiea, a great little mare owned by Gubbera Park. She carries double lines to Electric Silver. Mythiea was the last daughter of Gubbera Park's foundation mare Miraa (whose lines are well represented in our stable as well), who also produced multi champion Late November. Miraa was a daughter of the impressive Crystal Fire, a great broodmare sire. Miraa's dam was the lovely Hespera, of the Silver Fire dam tail line.
Al Hakam is an oucross to the very popular Riffal and Sindh bloodlines, thus making him a great stud to any mare with (or without) bloodlines to those two stallions.