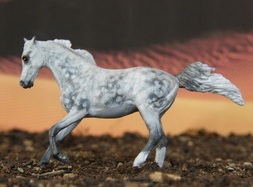 Saheeba
Mares | Stallions
The Crabbet Arabian is a specific strain of the Arabian breed. In the late 1800s and early 1900s, Lady Wentworth of the Crabbet Park stud in Essex (England), purchased several Arabian stallions and mares from the desert land. The sons and daughters of these horses continued to breed, thus creating a separate strain of Arabian: the Crabbet (or English) Arabian. A pure Crabbet must have all his or her lines trace to the horses purchased by Crabbet Park stud.
The Crabbet Arabian is nearly identical to the Egyptian Arabian in appearance. The Crabbet, however, is noted for its height, as they generally stand taller than any other strain within the Arabian horse breed.

Breed description: overall light build, distinctive head shape (dished), refined body, high tail carriage, big intelligent eyes, small muzzle, elegant appearance. Purebred Arabians can be chestnut, black, bay, grey and rabicano. Sabino is not uncommon in the breed, and rabicano is acceptable as well. Crabbet Arabians are generally taller than other strains of the Arabian breed, since Lady Wentworth preferred to breed her Arabians to be tall to make better mounts for hunting and other sports.

Naming Guidelines: Maximum of 21 characters including spaces, no more than 4
separate words. No numerical prefixes or suffixes or suffixes of Jr./ Sr..
Punctuation, apostrophes or diacritical markings are not allowed in the name.
The only valid characters are letters A to Z, space and dash. The Crabbets tend to follow family names, but not required.


Our Program:
We have only just started our Crabbet Arabian program. However, we firmly believe we have some of the highest quality horses. We have several stallions and mares imported all the way from Australia, where Crabbet Arabians are highly in demand as breeders, performers and racers. Furthermore we have a few stallions of newer English lines. We have both horses with Riffal/Indian Gold/ bloodlines, as well as outcrosses on those popular stallions for a good mixed gene pool.
Our special interest lies in the Silver lines with sires like Silver Vanity and Silver Blue. We are also interested in the older Australian Crabbet lines that include Sindh, Silwan and Barada II. Lastly, we adore the great sire Rissalix, whom we try to include in our horses' pedigrees.