To make a Breeding Request, please read the Breeding Policy first. Please do not use the horses or pictures on this page without asking permission. All Andalusian pedigrees are verified with the ANCCE, the official PRE registry in Spain. 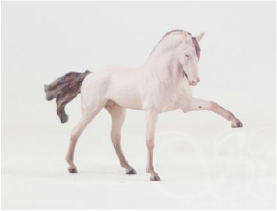 Being a perlino, Virgilio is a rare example of a double dilute Andalusian. He carries two alleles for cream, so his offspring will always inherit at least one. Virgilio is by Octavo II, a smokey cream PRE stallion who carries two lines to the magnificent stallion Nervioso II in the 4th generation of his pedigree. He also traces to Destinado III (a stallion of Carthusian lineage), and Botinero III.
Virgilio's dam, Hoguera, brings a lot of Carthusian blood into the pedigree. She is by Piropo, whose maternal grandsire was the Carthusian stallion Agente. Piropo's lines also include Bilbaino III, Maluso, Juglar and Leopardo. Virgilio's second dam, Baturra XI, is the source of the cream gene on the dam's side of the pedigree. Her bloodlines include Nevado III and Descarado II. Virgilio makes an excellent choice to breed very correct foals with lots of colour.

Available for breeding 2007 - present, to all Andalusian and Lusitano mares. Other breed mares considered upon request.
~Virgilio's Progeny~
To be expected